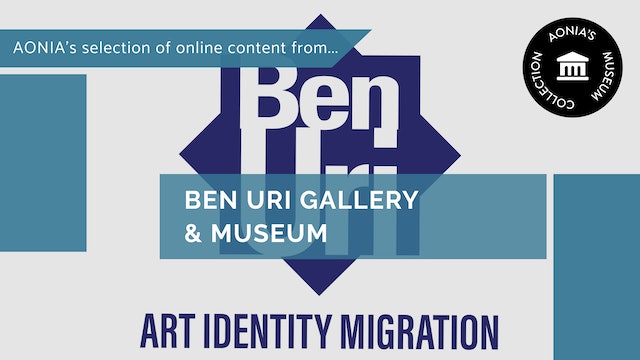 ABOUT
In 2018 Ben Uri announced its Digital future through its published Sustainability and Public Benefit Strategic Plan and since 2020 has transformed and embraced a digital future as its primary vehicle of engagement – supported by a physical presence via its St Johns’ Wood gallery, London – to create the ‘First Full-scale Virtual Museum and Research Centre’ at www.benuri.org.

Ben Uri was founded in Whitechapel, London in 1915 to provide support for Jewish immigrant artists working outside the traditional mainstream and named after Bezalel Ben Uri, the biblical creator of the tabernacle. Reflecting these origins, the collection, initiated in 1919, is principally by late 19th, 20th and 21st Century artists of Jewish descent. Since 2002, however, the remit has expanded to include the wider immigrant contribution to British visual culture since 1900, irrespective of national, ethnic, or religious origins, and the collection today reflects three principal waves of migration to this country from c. 1880 to the present day: https://www.benuricollection.org.uk/

In the past 20 years, Ben Uri has curated some 100 distinctive exhibitions, toured to some 25 different locations worldwide and written and published some 40 scholarly catalogues and monographs which are distributed nationally and internationally. The majority of exhibitions were curated around Ben Uri Collection works and supplemented by loans from other distinguished museums and selected important private collections across the country. Today, many of these exhibitions are available in digital format online (https://benuri.org/exhibition/), accompanied by a wide variety of talks and publications (https://benuri.org/exhibition/) by both the Ben Uri team and other distinguished scholars in the field.

The Collection and exhibitions programme are now part of the wider Ben Uri Research Unit for the Study and Recording of the Jewish and Immigrant Contribution to British Visual Art since 1900 (https://benuri.org/researchunit/), the first comprehensive online resource recording the lives and careers of major Jewish and immigrant contributors to British visual culture since 1900. It includes immigrant artists (and those born to immigrant parents within ten years of their arrival) and related professionals (including curators, gallerists, dealers, patrons, publishers, critics, teachers, and art suppliers), as well as their professional affiliations and networks.

This is one of Ben Uri's two principal and distinctive public benefit-generating initiatives, alongside The Ben Uri Arts and Health Institute (BUAH), which addresses and researches the role and construction of art interventions, using the museum's collection as a resource, for the growing demographic of older people living in social isolation and/or with dementia via the design, production and national dissemination of widely accessible digital arts programming.

AONIA SAYS - BEN URI ONLINE
Discover the Ben Uri Gallery and Museum’s digital program, as well as informative videos about their mission and ethos below. Learn about notable Jewish and immigrant artists, curators and teachers, who have contributed to British visual culture and continue to make their mark today. Scroll down to discover what you can enjoy online from Ben Uri.